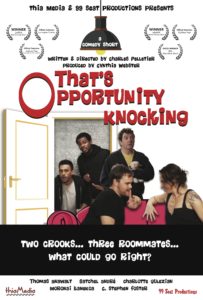 What could go right?

Two wanna-be thugs attempt to rob an apartment; everything goes awry when the owners show up early for a little late-night sex. A game of cat and mouse ensues.

Rob and Merrit are two desperate men who are struggling to find work and resorting to robbing an apartment. The reluctant criminals use keys from a purse they snatched earlier. They begin to grab the loot, unfortunately for them the girl returns to her apartment with her roommate looking for her missing purse. This is only the start of the problems for the pair of robbers as Tim, the roommate, has plans of his own with Chelsea, the purse owner, and they don’t look to be leaving the apartment anytime soon.